Michael Gill, a past AIDA President and Past President of AILA has delivered the Geoff Masel Lecture read more... 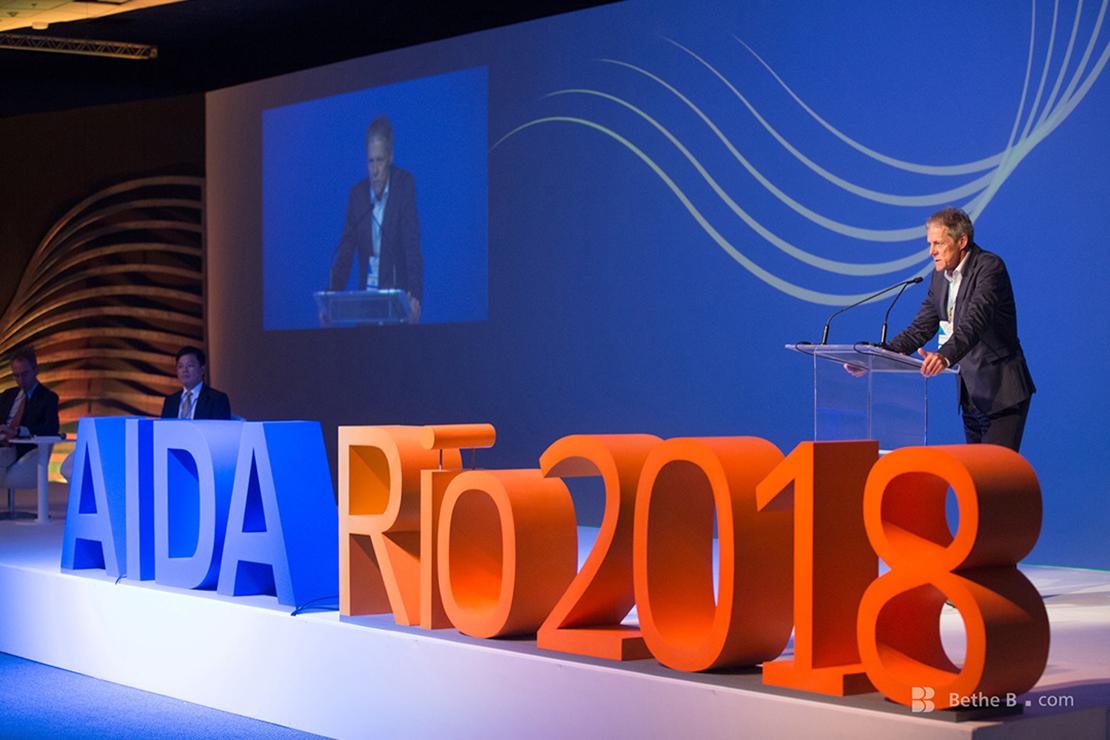 AIDA Europe (Association Internationale de Droit des Assurances Europe) is established as an association pursuant to Articles 60 et seq. of the Swiss Civil Code. It is governed by its own by-laws and, in matters not covered by them, by the legislation of Switzerland. Its seat is in Zurich, Switzerland.

By the terms of its By-laws its members are confined to European AIDA National Section members, to European ARIAS entities which are centrally affiliated to AIDA and to any other AIDA National Sections, not otherwise forming part of any other regional grouping of AIDA, which conform with the aims of AIDA and which have an interest in collaboration at such a regional level.

AIDA Europe covers its expenses by various means which include sponsorship contributions or donations received from Members or others, from the net proceeds of any events or activities which it may arrange and by way of any annual Members’ subscriptions, as may from time to time be decided.

Its affairs are managed by its Assembly, by its Committee and by Special Sub-Committees it may establish to perform specified tasks.

2. AIDA Europe is a non-profit making European association of unlimited duration with the purposes of promoting and developing directly and through its members, i.e. National Sections of AIDA (Association Internationale de Droit des Assurances) and centrally-affiliated AIDA Insurance and Reinsurance Arbitration Societies (ARIAS), which are at any time both eligible and accepted as AIDA Europe Members, the development at a European level of insurance and related law,

a. the study and knowledge of international and national insurance law and of related matters;

c. facilitating the exchange of academic know-how between its Members and any other European organisation similarly dealing with insurance-related matters;

d. supporting academic work in the field of insurance, such as co-operation with universities or the sponsoring of academic research and papers.

AIDA Europe shall be governed by these by-laws and, in matters not covered by them, the legislation of Switzerland, in particular Art. 60 et seq. of the Swiss Federal Civil Code shall apply.

The seat of AIDA Europe is Zurich, Switzerland.

AIDA Europe shall by the following ways and means, in addition to any others the Committee may consider appropriate, endeavour to achieve the aims enumerated in Article 1 paragraph 2:

a. providing for the organisation of European colloquia at regular intervals, including publication of relevant papers and documents;

b. participation, when considered useful, in international meetings, such as congresses, conferences, symposia, roundtable conferences, etc. in co-operation with other bodies concerned;

c. issue of periodicals reporting on the activities of AIDA Europe and its National Sections and on developments in insurance law (legislation, jurisprudence, doctrine);

1. Eligibility for membership of AIDA Europe is confined to those European National Sections which are members of AIDA and any European ARIAS entities which are centrally affiliated to AIDA and in each case situated in Europe, or to any other AIDA National Sections, not otherwise forming part of any other regional grouping of AIDA, which conform with the aims of AIDA and which have an interest in collaboration at such a regional level.

2. Any entity which fulfils the said eligibility criteria and is not already acknowledged as a member of AIDA Europe must make application for membership to the AIDA Europe Committee via the Committee’s designated secretariat support in such manner as may from time to time be directed. The AIDA Europe Committee will inform applicants of the result of any application as soon as possible and of the terms of such membership. AIDA Europe will generally be keen to welcome the admission of eligible applicants, but reserves the right through its Committee to decline or to impose special terms upon membership or at any time to issue a suspension or termination of membership as the Committee may deem appropriate.

3. Subject to the provisions of Article 5 paragraph 2, Members are entitled to take part in or to be represented at the Assembly and all Members are to collaborate in the implementation of the aims of AIDA and AIDA Europe, in particular in the preparation of reports for the colloquia, and the communication, at least once a year, of information on the development of insurance law in their own countries.

AIDA Europe covers its expenses by various means which include sponsorship contributions or donations received from Members or others, from the net proceeds of any events or activities which it may arrange and by way of any annual Members’ subscriptions, as may from time to time be decided by the Assembly, in light of proposals made by the Committee.

AIDA Europe's executive instruments are the following: a. The Assembly (Article 9) b. The Committee (Article 10) c. Special Subcommittees (Article 11)

1. The Assembly comprises delegates duly elected by the Members.

2. Each Member shall have one vote at the Assembly. Resolutions, including elections, shall need a simple majority of votes present to be passed, with the exception of the decision calling for the dissolution of AIDA Europe or the changing of the aim of AIDA Europe as set out in Article 1 paragraph 2 above, both of which require a qualified two-thirds majority of the votes of all Members. Each Member may appoint, as its proxy, any other Member of AIDA Europe or the Chairman or a Vice-Chairman of AIDA Europe, to vote upon any resolution either according to the direction of the member granting the proxy, or at the discretion of the proxy-holder. Such appointment shall be in writing and a copy thereof shall be lodged with the AIDA Europe Committee via their designated secretarial support prior to the Assembly meeting.

3. The Assembly is the highest executive authority of AIDA Europe and shall decide on the following matters:

a. election of the Chairman and other members of the Committee;

b. annual Members' subscriptions, if need be;

c. amendments of the by-laws and dissolution of AIDA Europe; and

d. all matters which are reserved by law (Art.65 para. 1 and 2 of the Swiss Civil Code) or which are not assigned to the Committee.

4. The Assembly shall meet at least once within four years.

5. At the request of the Committee or of at least five Members the Assembly may pass resolutions by correspondence. In such circumstances, resolutions, including elections, shall need a simple majority of votes cast, save for any call for the dissolution of AIDA Europe or the changing of its aim which shall in each case require a two-thirds majority of all votes cast.

1. The Committee is the managing body and represents AIDA Europe externally. It shall be responsible for all matters other than those reserved for or assigned to the Assembly as provided for in Article 9 paragraph 3 d) above. Subject to the terms of this Article, it shall organise itself as it deems necessary.

3. The members of the Committee shall present a list of prospective Committee members to the Assembly for election. Every endeavour shall be made to ensure fair geographical and linguistic representation; likewise the numerical importance of the members shall be taken into account.

6. The Committee will prepare annual reports of the activity of AIDA Europe which will be sent to the Presidential Council and General Assembly of AIDA.

7. The Committee may fix fees for specific projects and/or events.

8. The resolutions of the Committee are made by simple majority of votes cast. Each member of the Committee shall only have one vote. In the event of a tied vote the Chairman shall have the casting vote.

The Committee may establish Special Subcommittees to be charged with specific tasks.

The working languages of AIDA Europe are English, French, German, Italian and Spanish. The Committee will determine which languages will be used at any meetings/conferences etc and for any communications etc.

A Member may withdraw from AIDA Europe at any time subject to six months prior notice effective from 31st of December in any year.

In the event of the Assembly deciding to dissolve AIDA Europe any net funds of AIDA Europe which remain after its liquidation will be passed to AIDA, or in case of AIDA’s absence to qualify for Swiss tax purposes, to any other charitable, tax exempt organisation in Switzerland, as determined by the body responsible for the dissolution of AIDA Europe. This provision may not be altered as long as AIDA Europe claims any tax exempt status according to applicable Swiss tax laws or regulations.

1. In these by-laws, except where it is inconsistent with any more specific legal obligation or where any contrary intention expressly appears, the expressions, “written” or “in writing” or “by correspondence” shall include all communications, including notices, and all accompanying materials (which shall be considered an integral part of the communication or notice whether sent by way of attachment or a link to information available on a website or both), sent electronically via email or other comparable technology which permits access by visual display and digital storage and/or reproduction by printing.

2. For the avoidance of doubt, notices convening meetings and documentation required to accompany such notices may be served electronically by any form of electronic communication to which the Member has consented and where so served shall be deemed to have been received by the recipient Member on the date and time of sending unless a failure notice is received by the sender within twelve hours of the email or equivalent being sent.

AIDA Europe is registered as a Tax-exempt Organisation (for charitable purposes) under Reg-Nr J000201636, and is resident in Zurich/Switzerland.